The London 50 Hour Improvathon is back! April 29th – May 1st at the Lost Theatre. Stockwell, London.

This year’s setting is The Orient Express, commemorating 40 years since the death of Agatha Christie. Join us for any 2-hour episode or bring a sleeping bag and stay for the weekend.

There are a lots of opportunities to see Showstopper! The Improvised Musical all over the country this year!

You can also see the show on tour nationwide, click here for information on all the latest upcoming dates, and for details on how to book.

To book tickets to see Showstopper! The Improvised Musical in the West End, visit the Showstopper London website here. 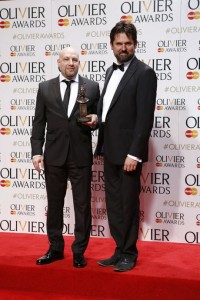 We’re thrilled to announce that Showstopper! The Improvised Musical won the Olivier Award for Best Entertainment and Family at this year’s ceremony!

This is a huge achievement for the show and for the team, particularly as it makes Showstopper!  the first improv show ever to win a coveted Olivier Award.

A huge thank you to everyone who has supported the show over the years, whether working behind the scenes or sitting in the audience, and well done to all the cast, past and present, for all their hard work.

Showstopper! The Improvised Musical has won a Chortle Award!

We’re delighted to report that the show won the Character, Improv or Sketch Act for 2016 at the Chortle Comedy Awards. The ceremony itself was hosted at Jongleurs in Camden in March 2016, where Showstopper cast memeber Pippa Evans also won the Music and Variety Award!

Well done to Pippa, and thank you to everyone who voted for us!

Showstopper! The Improvised Musical has become the first improvised show ever to be nominated for an Olivier Award (Best Entertainment and Family). It also recently won a Chortle Award for best Improv, Character or Sketch Act.

2015 was a great year for Extempore Theatre.

Two new shows – Rhapsodes and The Society Of Strange – were launched at the 2015 Edinburgh Fringe Festival.

Showstopper! moves to a residency at the Lyric Theatre, Shaftesbury Avenue, London.

Dates will soon be announced for the 9th annual London 50-Hour Improvathon, the record-breaking extravaganza, which rallies together the finest improvisers from all over the world.

We will be going back to Edinburgh with another season of projects for the world’s greatest arts festival.

And look out for our Impro Dojo – a series of improvisation classes and workshops.